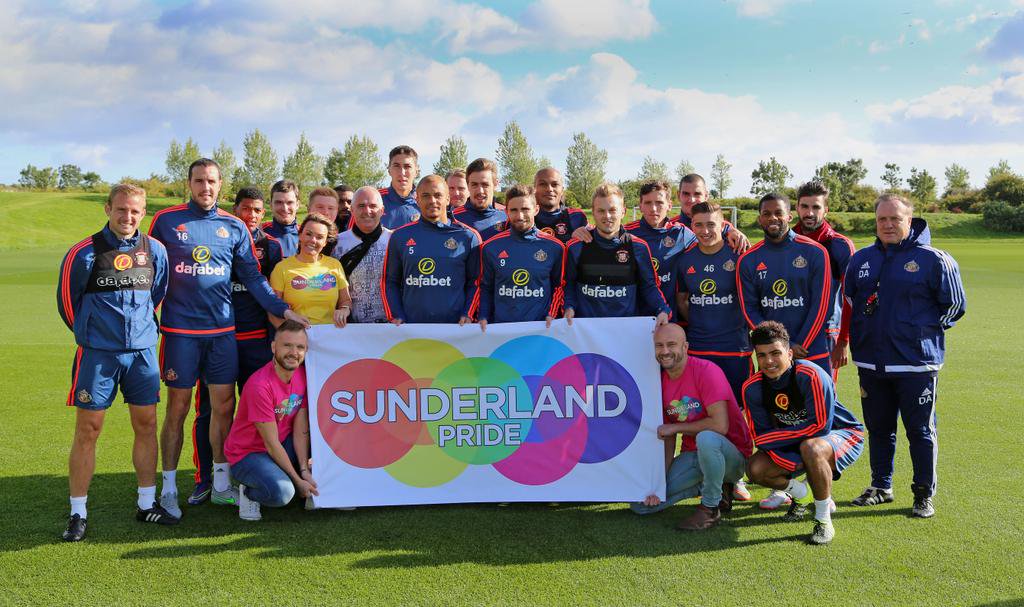 Photo: Kieron Brady in his capacity as first ever footballer to be Patron of Gay Pride, with the Sunderland first team squad in September 2015.

“I picked Marshall E-Learning because they have a genuine commitment to diversity and understood my work.” – Kieron Brady, CICI

Kieron Brady is a former professional footballer and now Equality expert who had to retire at 21 due to injury.

Though he only played 40 times for Sunderland FC over a two and a half year period, the skill and trickery he produced lives long in the memory of fans lucky enough to see him and he remains a cult hero among Sunderland fans who continue to marvel at just what a player he could have become but for a cruel career-ending injury.

He was once described by Michael Gray, speaking on Talksport in the summer of 2012 and the former Sunderland captain and England internationalist, as “the most talented footballer he has ever seen.”

Today, Kieron is bringing change to people’s lives in a very different but important and relevant way.

Keiron now runs the Celebrate Identity Challenge Intolerance Equality and Diversity training group (CICI) which educates around the areas of racism, religious intolerance and other forms of discrimination. Founded in 2009, CICI has experience in the personal delivery of over five hundred training days, sessions, workshops etc on the issues of Equality, Diversity and Hate Crime.

One of the key pieces of work that Kieron wanted to re-invigorate in 2016 was an ACAS reviewed e-learning training course put together some years ago around the Equality Act 2010, recognised as a leading resource when nominated as Best Diversity Resource in the 2015 Excellence in Diversity Awards.

The course covers the nine protected characteristics within equality, centred around the Equality Act 2010. In addition, it focuses on various forms of discrimination, harassment, victimisation. The aim is to engender confidence in the employees in their understanding of equality legislation and to enhance the existing training around diversity and equality in their organisations.

“When I created this course, it was reviewed by ACAS and the feedback was very positive, indicating it is a very good course. Hopefully that will engender confidence in the employees which has been approved by people that influence equality legislation.”

“There are little activities as you navigate a path through the course where you’ll be asked questions about racism, sexism, discrimination, designed to education and inform. There is a 20 multiple choice assessment if the takers of the course get 12/20 right of more (60%) then they will be sent a certificate to show that they’ve taken the course.”

The challenge for Kieron in 2016 was refreshing his training module to reach a broader scope of people and organisations in a mobile-friendly e-learning framework.

In looking for a partner for the course redesign, Kieron sought out a partner who was proficient in diversity and inclusion language, and who also had a strong understanding of e-learning best practice, graphic and technical skills.

To that end, Kieron partnered with Marshall E-Learning Consultancy on a new version of his Equality and Diversity e-learning course as they shared the same mission and passion for workplace rights and equality.

“Personally, I’ve always been opposed to all forms of prejudice and I’ve worked within the areas of equality and diversity in a decade. Back In 2010, I was asked to create an e-learning course form an organisation that specialises in ergonomics, but that didn’t materialise.

“In effect, I was left with this written work, but in order to create some form of elearning course my written course would have to be wedded to someone with graphic and technical skills. I had met with David and things have flourished from there. Apart from anything, we got on well on a personal level.”

The goal for Kieron and for Marshall E-learning in the refreshed course is to introduce the concept of being susceptible to prejudiced behaviour (in line with Unconscious Bias thinking) and to enhance the diversity training of organisations in the UK.

A demo version of the course can be found here.

In working together with Kieron, David Marshall of Marshall E-Learning points out that organisations doing similar types of work can collaborate and bring even perspective to diversity e-learning, like with CICI and Marshall E-learning:

“Kieron has his own unique take on diversity, and we hope to collaborate on other work he is doing on hate crimes. Kieron picked us because we have a genuine commitment to diversity and understood his work. His new course now works with smartphones, is compatible with voice reader software and now being piloted with local employers in the north east”.

Thanks to Marshall E-Learning, Kieron has renewed hopes for the course:

“My hopes for the course are at a professional level it would be able to help a broad range of people. As someone who is passionate about equality and social justice, I would want this to be about rights in the workplace, but also an education about their citizenship. ”

Start your project with Marshall E-Learning

To find out more about Kieron’s Equality and Diversity e-learning course or to learn about e-learning modules that we offer, contact Marshall E-Learning now to start your project.